Okay, so this week was good.   We have worked to get things done, I have packed everything that I am taking home with me into my bags, and now as I sit here writing this, I am in Harare, at mission office and am waiting for interviews with President Mkabela, and that is nuts.   I really don't know what to say.   Worked to get Dangamvura 2nd to be in good shape for Elder Chibanda and his new companion, Elder Kwaramba (an old friend from my days in Chegutu) so that they can keep the work moving forward.   I hope that they are going to have a lot of success and that things get done for them.   Hope the people we were teaching will get baptized.   I have had a blast on this mission.   And I have been so blessed to have served here.   I don't know how my life would be different if I hadn't, and I hope I never find out.   I really don't know what to say right now.

"Integrity means always doing what is right and good, regardless of the immediate consequences."
-Joseph B Worthlin

"Good timber does not grow easily.   It grows through wind and rain."
-Thomas S Monson.

I want to say, one last time as a Full Time Missionary in the Zimbabwe Harare Mission, I know that this is the true church of Jesus Christ.   I know that Jesus Christ and Heavenly Father came and showed themselves to the boy Joseph Smith, and called him to be a prophet, and They restored Their gospel through him.  I know President Monson is the prophet here on the Earth now.   I know that all that we claim to believe is in fact true.

"You said you'd always be there for me, but you're not, and it's my fault. It's my fault."
"That's not a king, it's a fuzzy maraca."
"You got to put your behind in your past.  No, sit down, before you hurt yourself, it's you got to put your past behind you."
"When the going gets tough the tough get going, that's our motto.  I thought our motto was 'Hakuna Matata'.  Pumba you got to stop living in the past, we need a new motto."

Posted by Unknown at 1:10 PM No comments:

"There is a difference between mostly dead, and all dead."   In mission when a missionary comes to the end of their service, some missionaries die.  Like stop working, start doing zhing things, and all that stuff.   Well, I have been wondering some days, am I mostly dead or all dead.   Some days I feel alive and great, other days I get trunky and it just becomes hard to do things.   I wish it weren't so, but such is how the longing works on an Ogier.   Anyway, most days I am good, it is just in the evening when my family is awake that it becomes hard, for the most part.   "Mostly dead, they're still partly alive, all dead, there is only one thing to do.   What is that?   Well, go through their pockets and look for loose change." 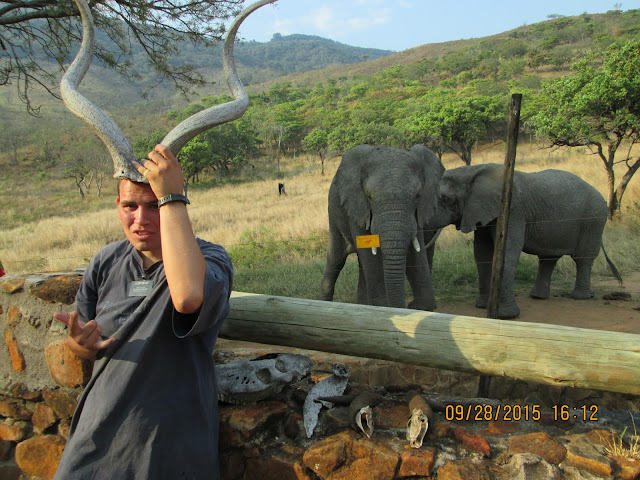 Okay, so I don't know how many of you used to watch Friends, but I did, and let me tell you something.   You know the girl Chandler used to date, who had a really weird laugh, well imagine that laugh with more of a bass to it, coming from a guy, and that is my companions laugh.   It is interesting.   Every time I hear it it makes me think of when I used to watch Friends with my parents.

Okay, so weather has been in the 33-36 range here in Zimbabwe.   The other day it got to 38, like 100 degrees for those who live in the states.   So safe to say, I agree with "old Rafiki" the weather is strange.   But it sounds like it should bring us some good rain sometime or other.   I don't know.   I just hope that my dear sweet Washington is still rainy and gray and beautiful.

Okay, so this week we have MLC, leaving when we get done emailing to go to Harare, and that will take Monday and Tuesday.   Then Saturday we have a Braai and stuff planned with the Zone and a family that I love in Sakubva, and then Sunday we will be going to Harare for the last time, so safe to say I have like Three days in the area this week.   It is odd how that works, but it is what it is.   Tying to cement some memories that may have to last me for the rest of my life.

This week was good, got some things done.   Got some people committed to baptism, and had several people come to Sacrament.   That was the best.   Nothing is worse then a investigatorless Sacrament meeting.   But that hasn't happened for a few weeks, so that is good. What is even better is getting a text from the AP's saying we are gonna Braai at the Presidents house, so we get to go there in P-day clothes.   In the words of my Uncle Elder Housekeeper YAGA!!!!   I love it.

"The Gospel is a fountain of knowledge that never runs dry."
-Gerald Causse

What a wonderful thing to be in a church led by our Savior through His chosen 12 Apostles and His one Prophet.   Just as it was in the time of Peter, James and John.   We got to see three new Apostles called and sustained this week in conference.   I know that we are led, not by man, but by our perfect Savior, through imperfect, yet wonderful men.   I know that they speak the words of God.   Never forget their words, or the words of any of the church leaders.   They are called, sustained, supported by God.   So why not loved and trusted by us?

"A wedding? I love weddings! Drinks all around! I know, clasp him in irons."
"Data, data, data, I can not make bricks without clay."
"Stop blowing holes in my ship!"
"I don't complain when you play your violin at three in the morning, I don't complain when you steal my clothing.   We have a barter system."
"Jack, Jack, Jack, hadn't you noticed, that's the same Island we mad you governor of at the end of our last little venture.   I had noticed."
"Case reopened."

I love you all.
Posted by Unknown at 7:49 AM No comments:

"I might [never go shopping again]"-How to Train your Dragon "[All] I see is a big white blob"-Return of the Jedi "You are [dropped]"-Terminator "You'd find more cheer in a graveyard."-Two Towers

Anyway, there is a part of our area called Gimboki and it has this super light colored sand and so when you go walking there at Noon time, you just get this big old glare into your eyes and you feel like you are gonna go blind, or maybe like Han felt when his eye sight was coming back to him while on Tatooen.   It is a really big area, and we don't get there much, but man it just burns your eyes.

Okay, so when missionaries stop visiting someone to allow them time to decide they want to learn about the gospel not be dragged to it, we commonly call that being "dropped".   Well, we have dropped a lot of investigators this past week.  And the past several weeks.   Like over 30 of them.   We took over two areas, so some of them are ours, some were ones that were left by the other missionaries, and they all wont come to church, read or pray.   So yea, we have moved on.   I have limited patience as it is, but especially now.

Maybe not more cheer in a graveyard, but probably faster songs.   We sing hymns so slow out here.   It is irritating, when I know the tempo that it is supposed to be and they are two and a half beats behind where they are supposed to be.   How slow do we have to sing?   I can't take it!   I just wish we had a piano that could play the tunes and then the people would know what they are supposed to sound like.

Anyway, the area is okay.   Small teaching pool, but we are working on that.   Got six new investigators, and four people came to church.   That was nice.   Now to get more of it to happen.   Yesterday was the farewell of a young man who is going to his mission, they only give a testimony, both for leaving and for coming home.   Do you think if I told that to Bishop Dunn, he would agree to it? 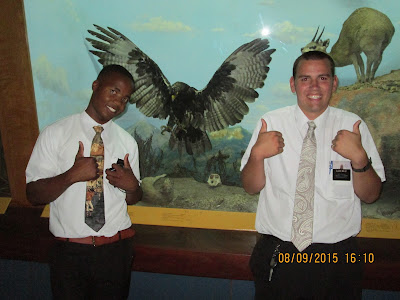 My companion is doing great.   Things are well, we are getting along, and that is great.   A member on the area keeps on telling me when ever he sees me exactly how many days I have left.   Number one, I already know, and number two, at least he hasn't gotten it down to how many hours.

"Being honest is more then just not lying.   It is truth telling, truth living, and truth loving."
-I can't remember which General Authority said it.

Okay, I know that I had another quote to go along with this, but much like the main character played by Robin Williams in Flubber, I am a little slippery minded.

But what a wonderful thought.   Are we telling the truth because we have to, or because we want to?   Are we not stealing because we might get caught, or because we respect what is not ours?   Are we being honest, or are we honest people.   My coaches always told me that integrity is who you are when you think no one is looking.   I know that it is important to be honest and do what is right in all that we do.

"I don't think he knows about second breakfast Pippin."
"Still traveling by mail, eh mister cheap-o? Its not a money thing, I have a plain phobia."
'This my friends is a pint. It comes in pints? I want one."
"The humans are getting fatter so as to be able to overpower us easier, also they are wearing less clothing to make it easier to strangle us."

I love you all.
Posted by Unknown at 9:37 AM No comments:

"First rule of leadership, everything is your fault"-Bugs Life "[We] work out"-Megamind "[Turn] it on."-Gnomeo and Juliet

Okay, so we had MLC this past week, and that was cool.   One thing that President really emphasized to us was that as the leaders we are the ones responsible for all that happens in the Zone.   Talk about pressure.   But it is nice, cause I need all the incentive to work that I can get.   People in the area are counting down for me and are always commenting on how little time I have left, like I have one foot in the grave already.   It is sometimes difficult to get going, but the instruction from President on working hard to be a productive area has given me something to shoot for.

Even I have to look up.

Where in the world?